Hi! This part is all about me. Just me. It feels weird to write a bunch of stuff about myself but I don’t like pictures of me so I’ll have to use words instead.

I live in Michigan with my fiancé, Joe Anderson. He makes me laugh so much I never have to do situps. Truthfully, I probably wouldn’t do situps anyway, but hey, it’s still a nice bonus to our love. 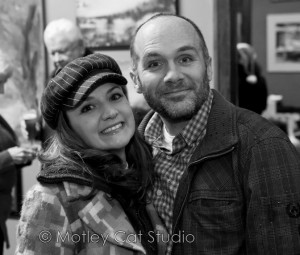 I’m an actress now, and I used to be a 2nd grade teacher. I loved that part of my life, but after doing it for a bunch of years, I was ready to move on to the next version of me. They’re not really very different versions-teachers and actresses both reach out and engage people through stories. I’m NOT a morning person, but waking up to tell stories makes mornings better-than-tolerable.

I love books and the Muppets and smart people and kind people (not necessarily in that order) and sleeping and chocolate and coffee and writers and learning and Oreo cookies and a bunch of other stuff-but I’m starting to make myself gag on all this love.

I hate a bunch of stuff, too, but who cares about that junk? It’s probably the same stuff you hate, so I won’t bore you. Except I REALLY hate listening to people eat bananas.