Seriously, treat yourself to this two hours of fun. It’s hilarious and irreverent, and sweet, and (as every parent can attest to) the more ridiculous it gets the more real it feels. 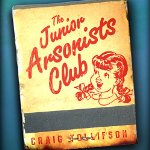 For young parents Marilyn and Brad, adopting an orphan girl from Belgorod, Russia, was supposed to make their lives complete. But from the moment she arrives, 12-year-old Zhanna has one thing on her mind: setting fire to the family couch. At first Marilyn is determined to love the pyromania right out of her new daughter. But when Brad jets away on business-or so it seems-Marilyn is forced into a dark and hilarious game of cat-and-mouse with the preteen pyromaniac.

Author Craig Tollifson is…well, here’s his Bio (it’s awesome, he’s awesome): Craig Tollifson is an author, artist, and Emmy-award winning designer. He is the author of the Junior Arsonist’s Club, the forthcoming novel Happy, and has written for Comedy Central’s Mystery Science Theater 3000. His story Senseless was nominated for a James Kirkwood Literary Prize. Father of two young dragons, he lives in Los Angeles, California. Visit him online at craig.tollifson.com.